Some bonsai contain deadwood. Sometimes it occurs naturally on the plant, and sometimes it is deliberately created by the bonsai grower. Deadwood can be present when the plant is selected to become a bonsai and/or develop later.

Examples of factors that can create deadwood:

Many bonsai growers use deadwood to enhance the appearance of age and of the plant having gone through struggles in life.

To prevent decay, deadwood is normally treated with some type of preservative, especially if there is a newly exposed area. Without a preservative, the dead wood might be attacked by decomposing insects, fungi, bacteria, or similar.

One common choice is a mixture that horticulturalists call lime-sulfur. It acts as a preservative and bleaches the dead wood, making it look more like weathered and aged wood. If the result is too white, the bonsai keeper might add some paint pigments to make the bonsai look more natural.

So, what exactly is this thing called lime-sulfur? Lime-sulfur a mixture of calcium polysulfides created by reacting calcium hydroxide with sulfur. One way of making lime-sulfur it is to boil calcium hydroxide and sulfur together with a small amount of surfactant (a compound that lowers the surface tension between two liquids). Lime-sulfur is reddish-yellow in color and smells bad. Nowadays, many gardening shops sell lime-sulfur, so you don’t have to boil your own.

The making of a jin is a bonsai deadwood technique employed on branches or on the top of the trunk. (Within bonsai culture, the top of the trunk is called “the leader”.) When the bonsai grower creates a jin, it is necessary for him or her to completely remove the bark from the start point of choice to the end of the branch or leader. Without the bark, the wood dies and dries out, forming the jin. 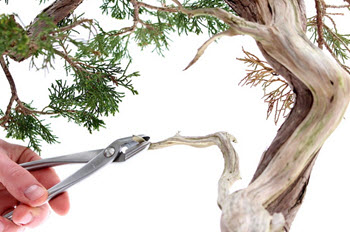 Jins, both branch jins and top jins, are often created to make the tree look older, and also make it appear as if it had to struggle and go through tough periods earlier in its life. In the wild, jins would be formed by factors such as lightning strikes and storms.

A jin made from the leader is known as a top jin. Making a top jin can be a way for the grower to create a shorter bonsai and/or enhance the tapering of the bonsai. It is also important to keep in mind that when the leader is removed, the resources of the plant will be distributes to the remaining branches, making them grow more rapidly than before and with more vigor. It can also help the trunk grow thicker more rapidly.

Another situation when the grower may opt for a top jin is when a bonsai has two leaders and that is becoming aesthetically unpleasing. By turning one of the leaders into a top jin, a better balance can be achieved.

On branches, the jin technique makes it possible for the bonsai grower to remove unwanted branches while simultaneously making the bonsai look older. It is up to the grower to decide how long the remaining deadwood (jin) will be. In some cases, it is kept very short, as if the branch had been naturally broken off near the trunk. In other cases, a longer jin is left. An aesthetically pleasing shape may be bent or carved into the jin.

Jins are typically created on coniferous bonsai. On decidious and broad-leaf species, a jin can look unatural, since jins on such species are very rare in the wild. When such a tree is injured, it is more common for the branch to rot and fall off the tree, leaving an indentation where the branch used to be. When a bonsai grower tries to copy this, it is called uro. You can read more about uro below.

As mentioned above, the uro is a technique typically employed on deciduous and broad-leaf bonsai plants. In the wild, a severely damaged branch on such a tree is likely to fall off, leaving a small indentation. Over time, new growth will form there, but the healing will not be without a scar – a small hollow will be clearly visible.

When bonsai growers try to mimic this on their tree, its called uro. The grower uses a tool to make a small, irregularly-shaped wound in the trunk.

An uro is often made when the grower wants to remove a branch and is afraid of ending up with an ugly wound if the tree is left to heal on its own. The branch is removed, and an uro is created, giving the grower more control over the end result. 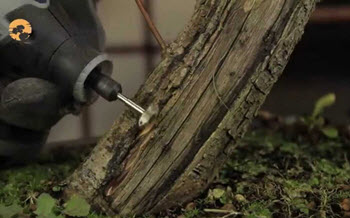 Exposing deadwood on the main trunk of a bonsai is called shari. It can appear naturally or be created by the bonsai grower.

In nature, shari is usually formed by a lightning strike or after a falling branch has ripped bark from the trunk below.

When a bonsai is said to be in the sharamiki style, it means that it has a lot of dead trunk, and possibly also dead branches near the dead trunk area. In Japanese, sharamiki means driftwood, and the term is an allusion to the silvery and weathered look of the deadwood on the bonsai, reminding the viewer of bleached and worn driftwood stranded on a beach.

It is important to still have living bark connecting the roots with the live branches of the bonsai, otherwise those branches will die. The contrast between death and signs of life creates an interesting tension in the bonsai for the viewer. It is quite common for Sharamiki bonsai trees to not follow the conventional bonsai styles.

Some bonsai growers carve the dead wood to make it look more weather-beaten.

In Japanese, the word sabamiki means split trunk or hollowed trunk. In nature, this type of severe trunk damage can for instance be the result of a lightning strike. When a bonsai grower wish to resemble this effect, they remove the bark from the trunk before drilling or carving out the exposed wood to produce a wound. It is important that there is still enough bark connecting the roots of the tree with the living parts, since parts that lose their connection to the roots will die.

When a living bonsai tree is joined with an interesting piece of deadwood to form a driftwood-style (sharamiki) bonsai, it is known as tanuki.

Tanuki is also the Japanese name for the Japanese raccoon dog (Nyctereutes procyonoides viverrinus). In Japanese folklore, this animal is a master of disguise and shape-shifting, and also both mischievous, funloving and irreverent. It is easy to see how tanuki was chose as a name for this type of mix-and-match bonsai technique, which some purists doesn’t acknowledge as “real bonsai”. There are many bonsai shows where tanuki is not allowed.

The deadwood in a tanuki bonsai is often utilized to give the appearance of a weathered tree trunk. A groove or channel is carved out, and the living tree is fixed within using write, nails, screws or clamps. The living tree of choice is something that is vigorous and flexible enough to endure the process, such as young juniper. Over time, it will grow into the channel in the deadwood, and the securing can be removed.

The deadwood and the living tree are usually not of the same species, but they will eventually look like one organism, at least to the untrained eye.