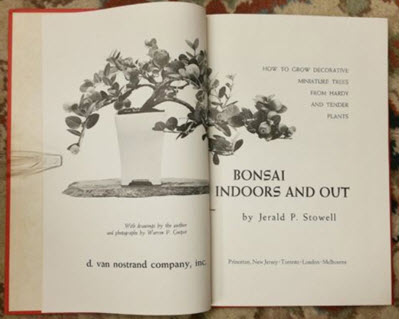 The bonsai containers imported from China from 1911 to 1940 are called shinto or shinwatare, which means “new crossing” (to distinguish them from the containers that were imported earlier). They typically came from China’s Yixing area, where they were mass produced in accordance with specifications given by Japanese dealers. At this point in history, the island Formosa (today known as Taiwan) was also exporting bonsai containers, but on a much smaller scale than Yixing.

The toolsmith Masakuni I (1880-1950) is an important figure in early 20th century bonsai history, since he was the first to design and produce steel tools to meet the new demands of the changing and developing bonsai hobby.

One example of a famed bonsai collection from the early 20th century is Prince Ōkuma Shigenobu’s (1838-1922) collection of dwarf pines and dwarf plum trees.

A few years into the 1910s, a permanent bazaar had been established at the north-east corner of Shiba Park in Tokyo, and sometimes exhibitions for potted plants and dwarf trees would be held there.

The first national annual bonsai show was held in Hibiya Park, Tokyo, in 1914. It was then held once a year until the last one in 1933.

In the 1910s, it became very popular to place bonsai plants in tokonomas. A tokonoma is a built-in recessed space (small alcove) in a Japanese-style reception room, and in this space objects are displayed. In the 1910s, many of the tokonomas in formal rooms and tea rooms in Japan started having bonsai displays.

By the early 1920s, the use of copper wire had become much more common among professional bonsai makers than before. Often, copper wires were used to achieve major changes to the shape of a tree, and the tree was usually sold quickly afterwards instead of staying with the bonsai maker to develop.

The first issue of the magazine Bonsai was published in 1921. The driving force behind the magazine was Norio Kobayashi (1889-1972). Running for 518 consecutive issues, Bonsai would be a highly influential magazine for the art of bonsai keeping in the 20th century. 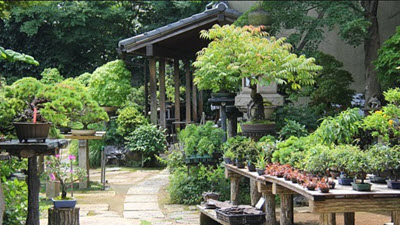 The origins of the Omiya Bonsai Village

In the 1923, the Great Kantō earthquake and the conflagration that followed destroyed the downtown part of Tokyo where many bonsai specimens were grown and kept.

Two years after the catastrophe, a group of thirty families that used to be bonsai growers in the Dangō-Zaka (Hongō) area of downtown Tokyo established themselves and their nurseries northeast of the capital. This was the origin of what we today call Ōmiya Bonsai-mura, the Ōmiya Bonsai Village.

The village is still there today, containing roughly ten privately owned bonsai gardens. There are hundreds of thousands of bonsai trees here, spread out over an area encompassing about 330,000 square meters. If you want to visit from Tokyo, you can take the Tobu Noda Line.

In 2010, the Omiya Bonsai Art Museum was opened here, featuring indoor exhibits of bonsai history and art, plus outdoor exhibits of notable bonsai specimens. Some of items on display has been moved here from the Takagi Bonsai Museum of Art in Tokyo.

Each year in early May, the Great Bonsai Festival takes place in Omiya Bonsai Village, attracting visitors from all over Japan.

The art of bonsai became somewhat more accessible to English-speaking readers in 1937, when the book “Japanese Tray Landscapes” was published in Peking (now Beijing), China. It was written by German bonsai aficionado Alfred Koeh, who would later – after the end of WWII – collaborate with the Japanese bonsai master Yuji Yoshimura to hold bonsai demonstrations.