In the 1600s, stories that mentioned bonsai (although using other terms) became comparatively common in Japan. There is for instance a well-known story about a gardener, who works for a samurai, creating hachi no ki. When the samurai insults a hachi no ki that the gardener is especially proud of, the gardener commits suicide.

Another story from the 17th century is about Okubo Hikozemon who was the councilor of the Shogun Tougawa Iemitsu. Iemitsu loved hachi no ki, but the councilor wanted him to spend less time and attention on his trees, so he threw one of the shogun’s favorite trees away – in sight of the shogun. The shogun, however, was not willing to give up his love for hachi no ki. 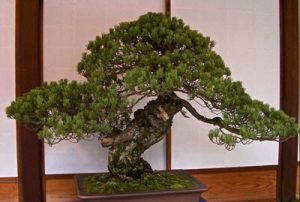 From the 17th century, we do not only know about bonsai plants from texts and depictions; there are actually some 17th century bonsai that have survived into our time. The exact age of the Sandai-Shogun-No Matsu bonsai in the Tokyo Imperial Palace collection remains unknown, but it was first trained as a bonsai by, at latest, 1610. One of the caretakers of this five-needle pine (Pinus pentaphylla var. negishi) was the aforementioned Shogun Tokugawa Iemitsu, who lived from 1604 to 1651.

In a horticultural book from 1681, miniature potted trees are called hachi-ue. According to this book, it was very popular to grow azaleas at this time, and even the poorest people did it. Those who could not afford a standard vessel used an abalone shell instead.

One of the first Europeans to write about (what we today call) bonsai and help spread knowledge about this art outside Japan was George Meister (1653-1713). He was a German gardener who was so eager to learn about Oriental gardens that he became a soldier for the Dutch East India Company in order to secure his passage to East Asia. With the company, he traveled to southern Africa, India, Java, Molucca, and Japan. His first text about Japanese dwarf potted trees is from 1692. when he writes in German about “Der Orientalish-Inidanische Kunst und Lust-Garthnern”.

Rough translation: “In the large round stones and cliffs, they have one foot deep round or long holes, which they fill with soil and, in their manner, plant small trees, some of which bear fruits, but most of all have beautiful and fragrant flowers, as well as all sorts of bulbous plants, which are rather rare and pleasant to see, … ”

Kowotari is a term used for bonsai containers exported from China to Japan in the 17th and 18th century. The word means “old crossing”. Many of them came from the provinces Yixing and Juangsu, but the Canton area also produced and exported this type of vessels, especially during the Ming dynasty.

In the Tenmei period (1781-1789), an exhibit of dwarf potted pines began to be held annually in Kyoto.