During the 19th century, numerous Japanese artists depicted dwarf potted trees in woodblock prints. The famous Utagawa Toyokuni III, also known as Kunisada, did for instance include hachi no ki in roughly four dozen prints, and the artist Yoshishige depicted each of the 53 classic stations of the Tōkaidō road as miniature landscapes. 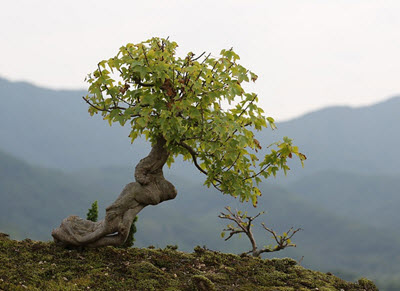 In the early 1800s, a group of Chinese art scholars gathered in Itami near Osaka to discuss recent styles in the art of miniature trees. Instead of using the old terms, such as hachi ue, the scholars renamed them bonsai – a Japanese word derived from the Chinese term penzai. Penzai, also known as penjing, is the ancient Chinese art of depicting artistically formed trees, other plants, and landscapes in miniature.

It would take until the late 1800s before the term bonsai was commonly used in Japan to denote dwarf potted trees in shallow containers.

Just as before, Japanese bonsai were often kept in vessels imported from China. The vessels imported between 1816 and 1911 are known as nakawatari or chūwatari, two terms that both mean “middle-crossing”.

Nakawatari / chūwatari are typically shallow rectangular or oval stoneware with drainage holes and carved feet. Before Japanese importers began buying them for bonsai use, they were created to be placed at Chinese ancestral shrines.

Published in 1829, Sōmoku Kin’yō-shū is a very important book for classic bonsai art. It stipulates certain criteria for ideal form that many practitioners of classic pine bonsai art still adhere to today. The book is very detailed and contains elaborate illustrations.

In English, this book is commonly referred to as “A Colorful Collection of Trees and Plants”.

In 1829, a grower began selling bonsai trees in Asakusa Park in Tokyo. His trees were small tako-stuki (octopus-styled) ones characterized by long, wavy branches.

During the two decades that followed, more and more sellers of bonsai arrived, until the neighborhood was filled with bonsai vendors.

At this time, the Asakusa district, located on the north-east fringe of central Tokyo, was an important entertainment center. It continued to be until it was heavily damaged by bombing raids during World War II.

Published in 1833, Kinsei-Jufu is a three-volume work about bonsai, suitable vessels and which tools to use.

The earliest photograph of a bonsai that we know of was taken around the year 1861 and depicts dwarf potted trees in Japan. The photographer is Pierre Rossier (1829-1886), a man from Switzerland who became the first professional photographer in Japan and a teacher of the first generation Japan-born photographers. 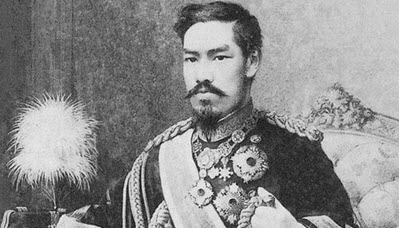 Reigning from 1867 to 1912, Emperor Meiji encouraged his courtiers to take an interest in bonsai, and government officials that didn’t keep bonsai plants risked falling out of favor with him.

As he left the old capital Kyoto and moved to the new capital Tokyo in 1868, the emperor had his Tokyo Palace filled with bonsai both indoors and outdoors.

Under Emperor Meiji, virtually all ministers kept bonsai, since not doing so would be risky for them. One notable exception was Prince Ito Hirobumi, the London-educated samurai who chaired the bureau which drafted the Meiji Constitution. Each time the emperor gave the prince a bonsai, the prince sent it on to the statesman Kijoji Itoh who was a noted bonsai collector and researcher.

This is also a point in history were we can see a separate export market emerging for bonsai. To satisfy foreign demand, octopus-style bonsai trees with long and wavy branches were mass-produced in Tokyo and shipped abroad. Bonsai makers catering to the domestic market would instead make more subtle and delicate trees in the bunjin style. These makers were usually located not in Tokyo but in Kyoto or Osaka. In Tokyo, a special style developed among the capitalinos, with bonsais featuring exceptionally large trunks.

The 1892 Artistic Bonsai Concours in Tokyo

In 1892, an Artistic Bonsai Concours was held in Tokyo, and a three-volume picture book was published to commemorate the event.

The 1800s was the century when bonsai really became well-known abroad, especially in Europe and North America where Japan participated in many international fairs and exhibitions. After each event, the bonsai were sold rather then shipped back to Japan.

Another reason for the 19th century spread of the art of bonsai was the fact that quite a few Japanese citizens migrated to the United States West Coast and Hawaii. With them, they brought their bonsai love and know-how.