Within the bonsai hobby there are a set of commonly known named styles that are used to described canonical tree and setting designs. The styles are not a list of strict rules that must be followed; they are more like a short-hand that makes it easier for bonsai keepers to communicate, and the style criteria can also function as a guide for a bonsai grower when working on a design. If you take a look at a bonsai exhibition or in a bonsai catalog, you are very likely to see specimens that are highly regarded within the hobby despite not strictly conforming to every aspect of their assigned style.

It is not unusual for a bonsai specimen can exhibit characteristics of more than one style. The common practice is to describe a specimen based on its dominant or most striking characteristic. 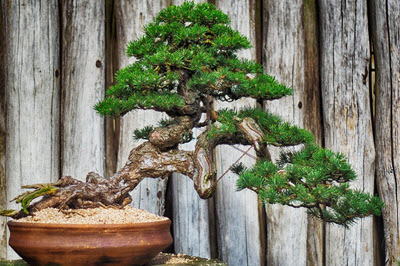 In this group, you’ll find styles based on the root’s position. There is for instance the neagari style where the roots are exposed as extensions of the trunk, and the sekijoju style where exposed roots are wrapped over a rock at the base of the trunk.

Within this group, a bonsai can be classified by the number of trunks, the configuration of the trunks, and more.

This is a group where the styles describe trunk shape and bark finish. A bonsai with a twisted trunk is for instance a nejikan, while a specimen with a vertical split is a sabakan. This is also the group where you find the various deadwood bonsai styles.

To learn more about bonsai styles, please go to the article “Bonsai styles: examples” on this site.