The Japanese art of bonsai has its roots in penjing, the ancient Chinese art of depicting artistically formed trees, other plants, and landscapes in miniature. In the 6th century AD, Japanese Buddhist students began visiting China, where they came in contact with penjing, and some of them brought back container plantings as souvenirs. Diplomats dispatch to China by the Japanese Emperor was another route through which knowledge about penjing reached mainland China. 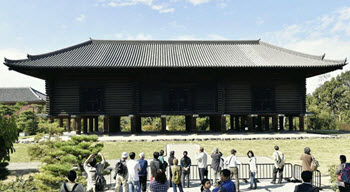 The treasure house Shōsō-in in Nara, Japan still houses an elaborate miniature tree display dated to the 8th century AD. It’s more similar to a bonkei than a bonsai since it’s dead, but it still reflects that period’s fascination with miniature landscapes. It consists of a shallow tray filled with a miniature riverine sandbar landscape created from sand, carved wooden mountain models and small tree sculptures made from silver.

The oldest known long work of fiction written in Japanese is Utsubo Monogatari, dated to the year 970 AD. It’s author is unknown, and it might have had several authors. This work contains the following passage:

“A tree that is left growing in its natural state is a crude thing. It is only when it is kept close to human beings who fashion it with loving care that its shape and style acquire the ability to move one.”

This shows that these ideas about nature, beauty and human guidance existed in Japan at this point in history.

Japan’s medieval period spans from 1185 to 1573, and includes the Kamakura, Nanboku- chō and Muromachi periods. It was a transitional period for Japanese literature, as Kyoto ceased to be the only literary center of the empire. As the practices of writing and reading became more widespread, a wider range of genres and literary forms developed. It is also during this period that we start seeing numerous depictions of bonsai in handscroll paintings.

The earliest surviving depiction of dwarfed potted trees in Japan is found in the scroll Saigyo Monogatari Emaki, a scroll dated to 1195. Recognizable bonsai can also be seen in the Ippen shonin eden from 1299. The aesthetic principles for bonsai, bonseki and Japanese gardens are outlined in the rhymed prose essay Bonseki no Fu, written by the Rinzai Zen priest and poet Kokan Shiren around the year 1300. The Kasunga Gongen Genki E, a set of painted silk handscrolls finished in 1309, depicts both wooden trays and low pots with dwarf landscapes, placed on shelves or benches. These scrolls were produced by members of the Fujiwara clan to honor the deities of Kasuga.

The Tsurezuregusa (Essays in Idleness) is a collection of essays written by the Japanese monk Yishida Kenko between 1330 and 1332. One of the chapters contain criticism of the interest in curiously twisted specimens of potted plants. The work probably had little influence on medieval Japanese society, since it wasn’t widely published until the early 1600s. Until then, it was considered a sacred collection that could only be handed down directly from master to student. 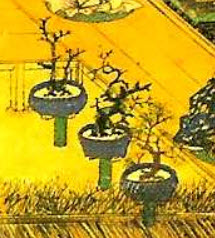 The term used for dwarf potted trees in 14th century Japan was hachi no ki, which means “the bowl’s tree”. These trees were typically planted in pots that were deeper than the shallow trays that are commonly used for bonsai today.

The playwright Zeami Motokiyo, who lived 1363-1444, wrote a play that he named Hachi no Ki. In this play, an impoverished samurai sacrifices his three last dwarf potted trees to make a fire to keep a traveling monk warm on a cold winter night. The monk turns out to be an official in disguise, and he rewards the samurai by making him the owner of three lands whose names include the names of the three trees that the samurai used as firewood: ume (plum tree), matsu (pine tree) and sakura (cherry tree).